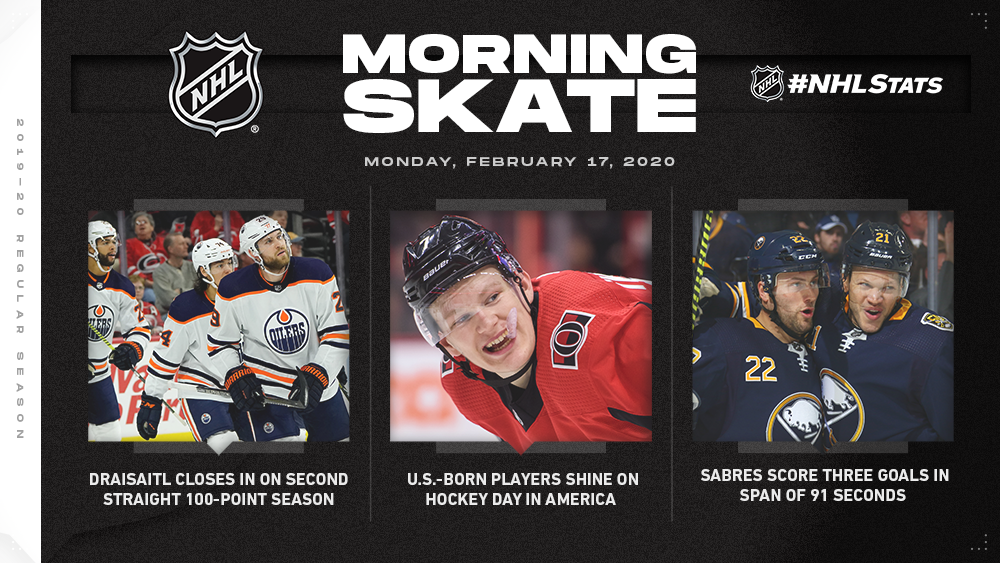 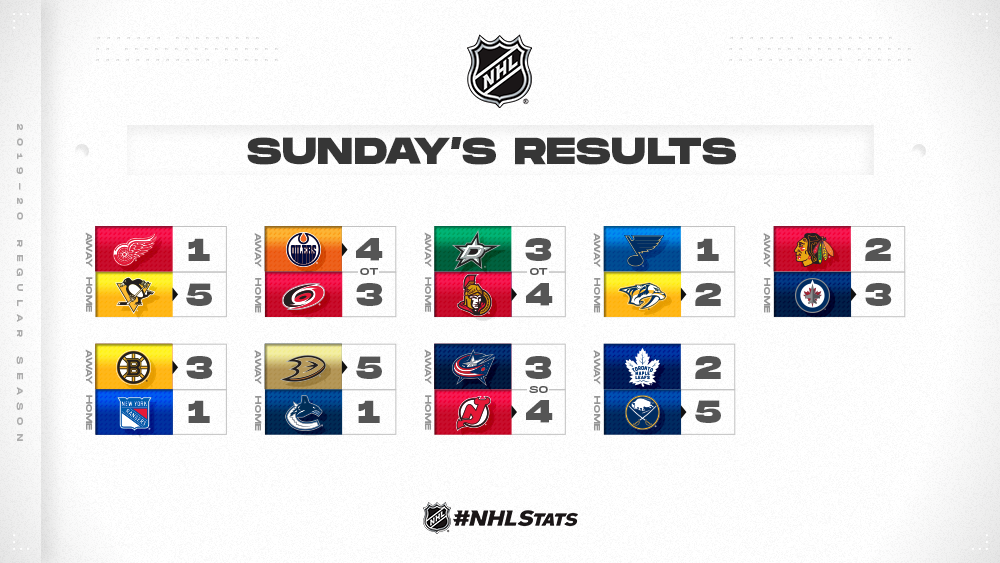 THREE HARD LAPS
* Leon Draisaitl, who made history in 2018-19 when he became the first NHL player of German nationality to reach the 100-point mark in a season, moved within five of another triple-digit campaign.

* A pair of U.S.-born players skating with teams based in their home state each scored as Hockey Day in America was celebrated on NBC and NBCSN. Overall, players born in the United States accounted for nearly half of all goals on Sunday.

* Will tonight be the night? Alex Ovechkin, who has been held off of the score sheet in each of his last four games, needs just two tallies to reach 700 career regular-season goals. 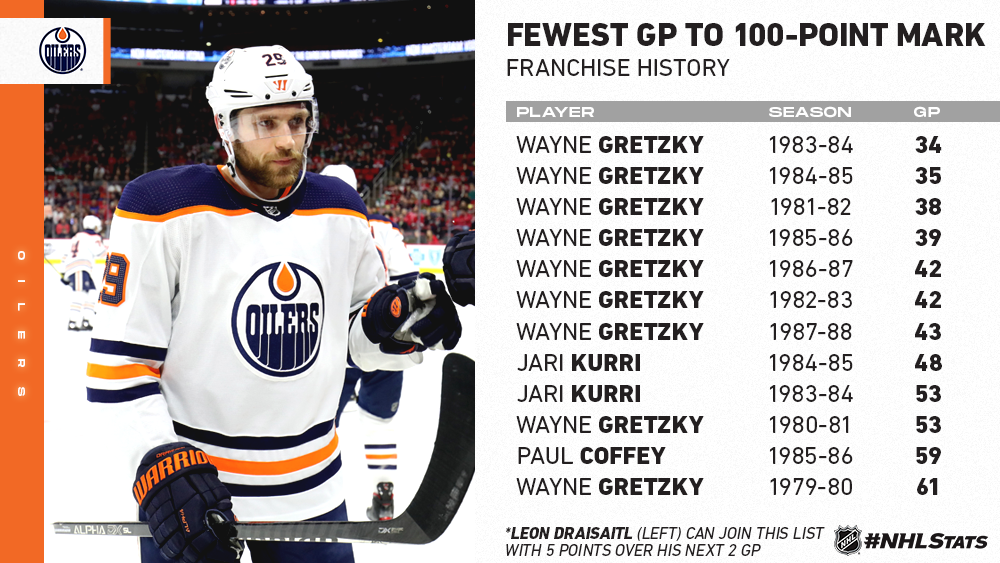 * Coyle, who was born just outside of Boston, scored the game-winning goal while shorthanded to help the League-leading Bruins (37-11-12, 86 points) improve to 9-1-0 in their last 10 outings.

* Boston scored a game-winning goal while shorthanded for the second time in as many days, with Patrice Bergeron achieving the feat on Saturday (4-1 W vs. DET). It marked the second time in franchise history in which the Bruins scored a shorthanded winner in consecutive games, following Feb. 27 – March 1, 1969 when Ed Westfall and Phil Esposito combined for the feat (since 1933-34 when goals by type were officially tracked). 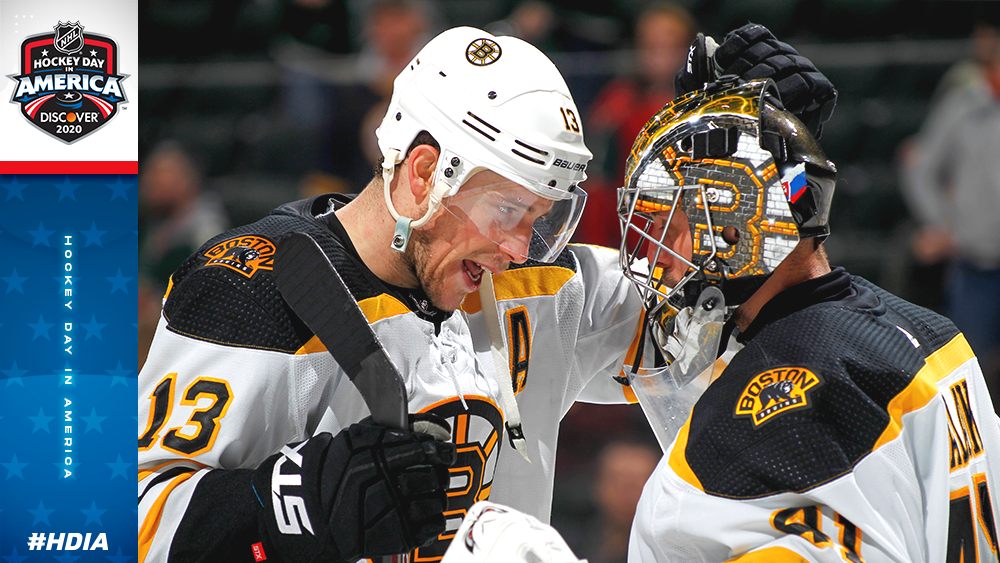 * Lafferty, who was born about 100 miles from Pittsburgh, was the first U.S. player to score a goal on Sunday – helping the Penguins improve to 36-15-6 (78 points) this season and move within one point of the idle Capitals (37-16-5, 79 points), who occupy first place in the Metropolitan Division standings. 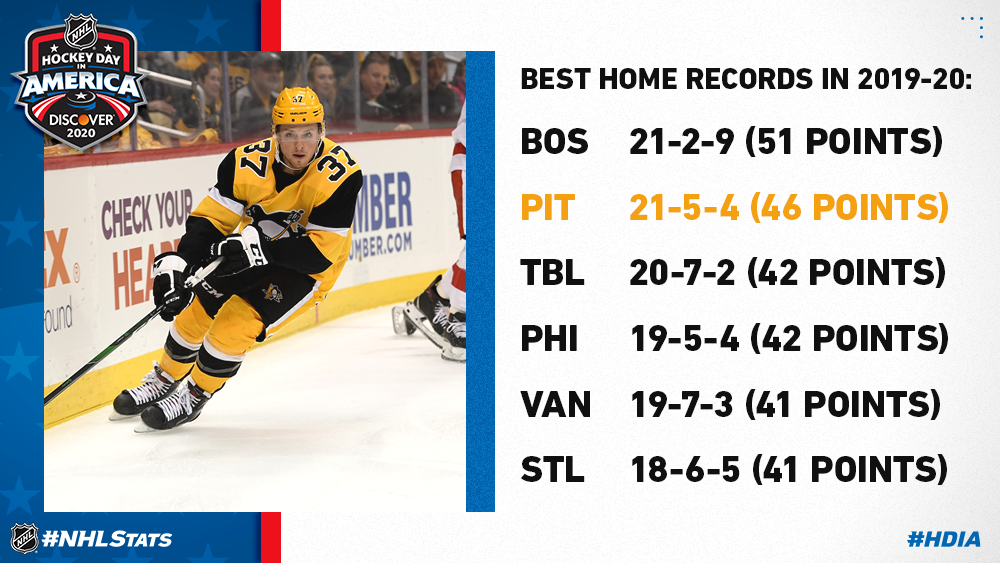 Kyle Turris scored the go-ahead goal with 2:12 remaining in regulation as the Predators (29-22-7, 65 points) swept their home-and-home, back-to-back set with the Blues and moved within one point of the final Wild Card spot in the Western Conference standings.

* Craig Smith, a native of Madison, Wis., opened the scoring for Nashville. U.S.-born players accounted for 21 of 51 goals on Sunday excluding shootouts (41.2%), with 11 different states represented among the scorers. 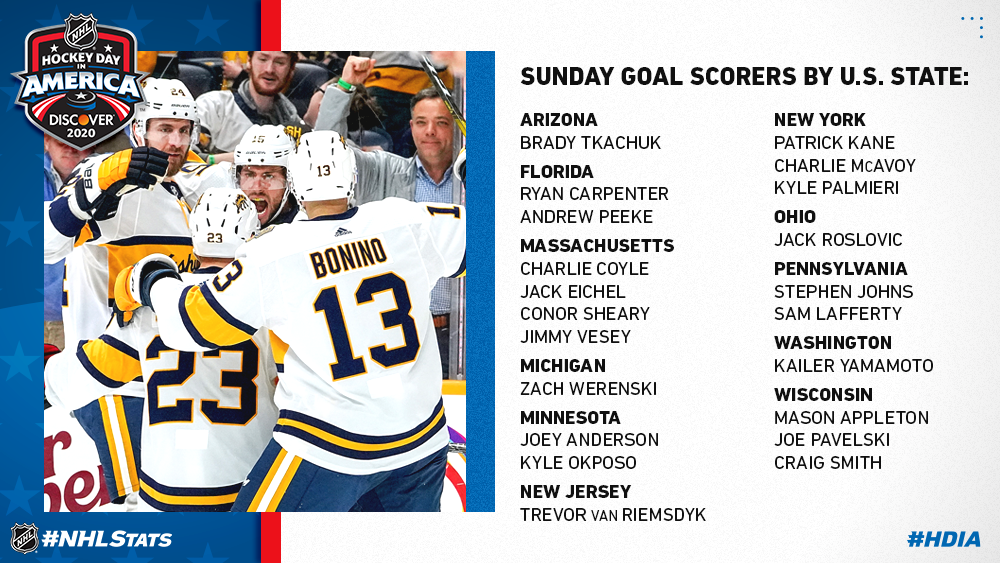 DID YOU KNOW?
Sabres teammates Jack Eichel (North Chelmsford, Mass.), Kyle Okposo (St. Paul, Minn.) and Jimmy Vesey (Boston, Mass.) combined for three third-period goals in a span of 1:31. It marked the second time in franchise history in which Buffalo tallied three times in a span of two minutes or less with each goal scored by a U.S.-born player, following Brian Holzinger (Parma, Ohio) and Derek Plante (Cloquet, Minn.) combining for the feat on Dec. 20, 1996 (1:42). 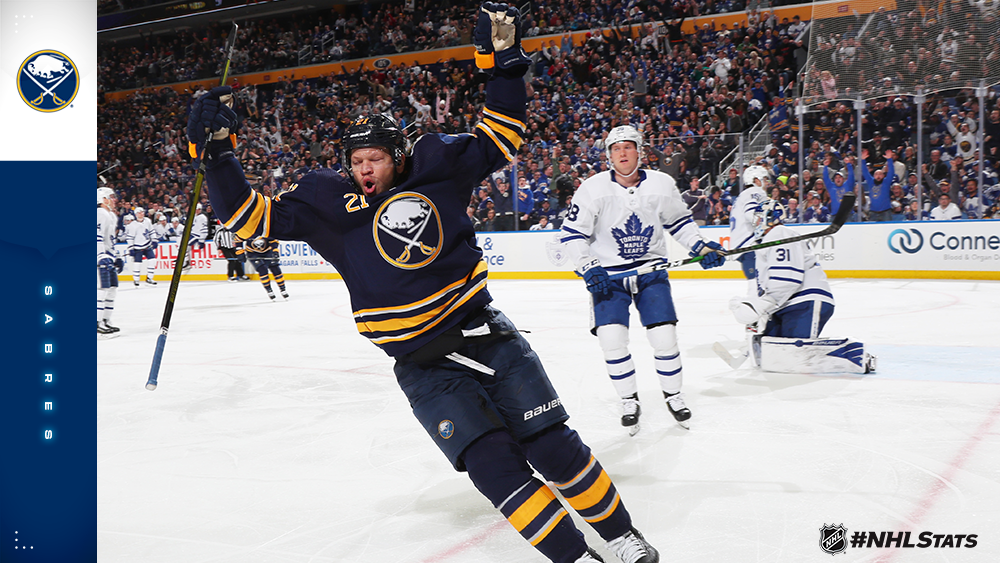 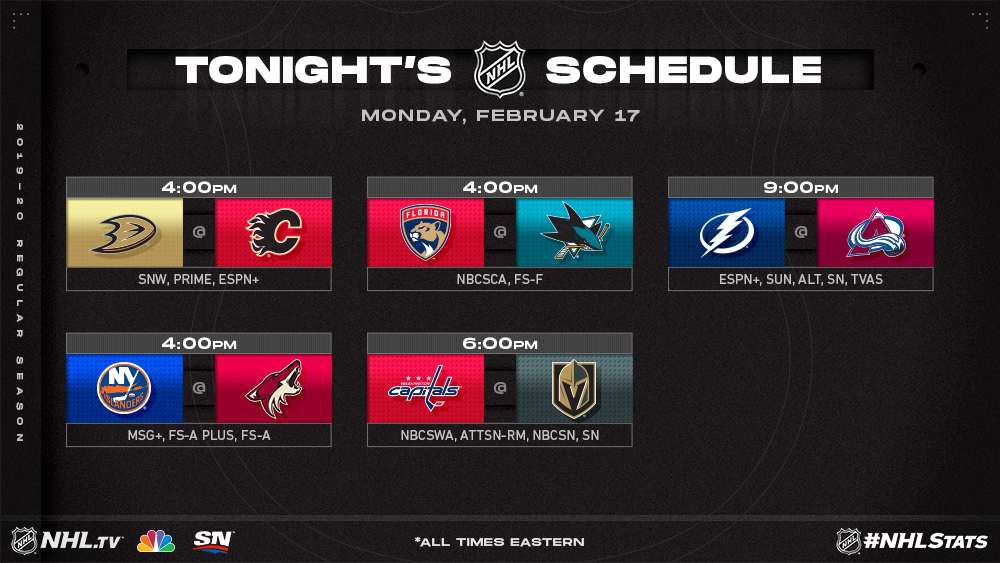 OVI AIMS TO SNAP FOUR-GAME SCORING DROUGHT IN PURSUIT OF GOAL No. 700
Capitals captain Alex Ovechkin (698-570—1,268 in 1,141 GP), who is two regular-season goals shy of becoming the eighth player in NHL history to reach 700, aims to snap a season-high four-game scoring drought when Washington visits Vegas at T-Mobile Arena. 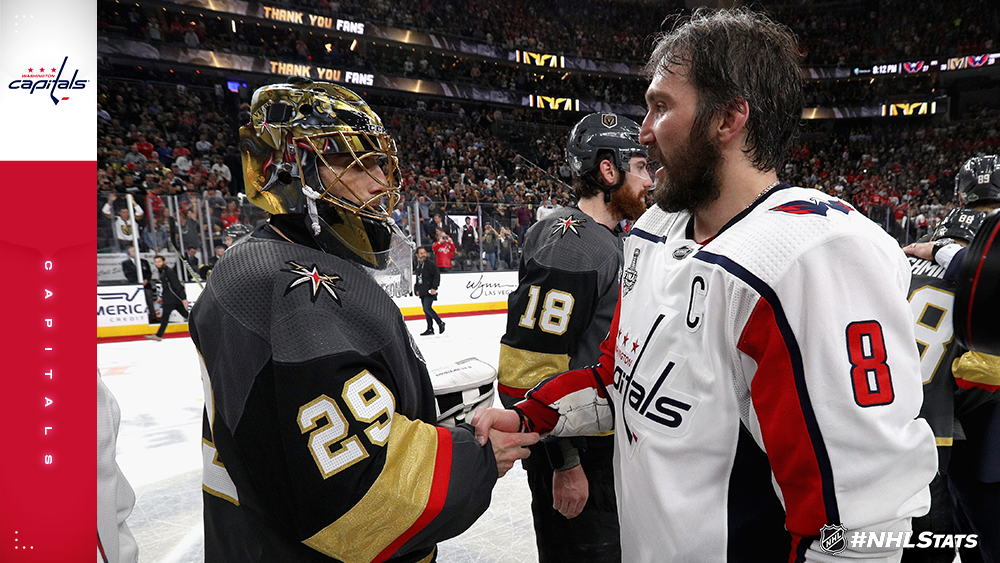 LIGHTNING LOOK TO EXTEND TEAM, PLAYER STREAKS
The Lightning, who are 10-0-0 in their last 10 games dating to Jan. 29 and own the longest active win streak in the NHL, look to extend their run to a franchise-record 11 contests when they visit the Avalanche at Pepsi Center.

* Tampa Bay defeated Philadelphia on Saturday to equal its franchise record for longest win streak, a mark set from Feb. 9-27, 2019 and matched earlier this season from Dec. 23, 2019 – Jan. 11, 2020. A victory on Monday would also give the Lightning the lengthiest run by any team this season. 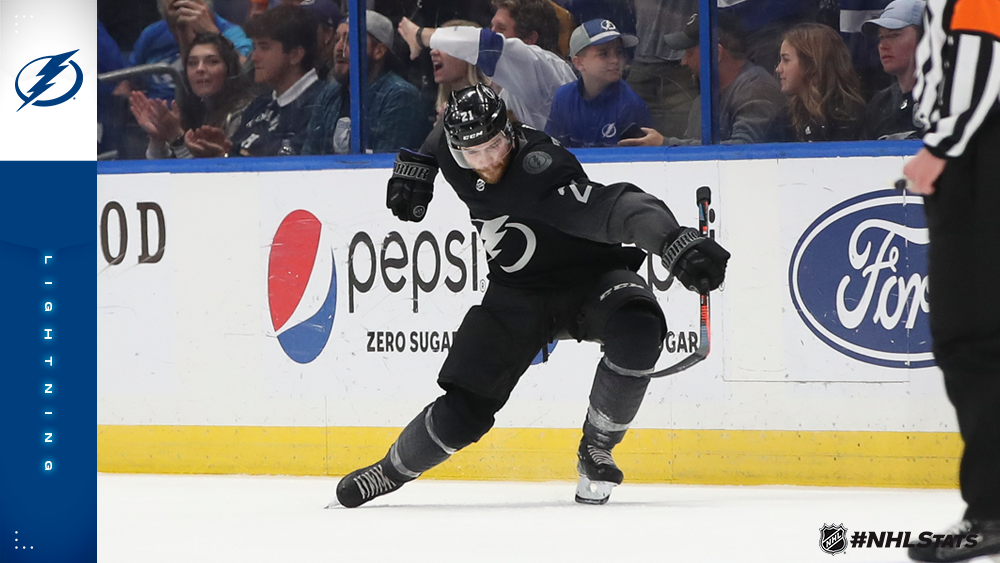